In Alliance with Cleveland Clinic's Heart, Vascular & Thoracic Institute, Ranked #1 in the nation for heart care. 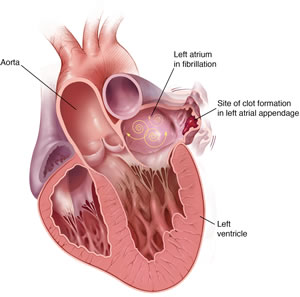 How Does AFib Increase Stroke Risk?
The average person with atrial fibrillation (also called AFib or AF) is five times more likely to have a stroke than someone with a regular heartbeat. That's because AFib can decrease the heart's pumping capacity by as much as 30%. Because blood isn't pumped out of the heart normally, it's easier for blood cells to stick together and form clots in an area of the heart called the left atrial appendage. When a blood clot escapes from the LAA and travels to another part of the body, it can cut off the blood supply to the brain, causing a stroke.

In people with atrial fibrillation not caused by heart valve problems (the most common type of AFib), more than 90% of stroke-causing clots that come from the heart are formed in the LAA.3

Learn more about types of AFib, symptoms and risks, and treatment for Afib.

But some people need an alternative to blood thinners, because they can increase the risk of bleeding. Some bleeding events are minor and easily treated, like a cut taking longer than normal to stop bleeding. In other cases, the bleeding can be life-threatening, such as when bleeding in the brain causes a stroke.

If you have a history of bleeding or a lifestyle, occupation or condition that puts you at risk for bleeding, your doctor may consider an alternative to blood thinners, such as the WATCHMAN Implant.

An Alternative to Blood Thinners
WATCHMAN is a permanent implant that offers an alternative to the lifelong use of blood thinners. It's about the size of a quarter and made from very light and compact materials commonly used in many other medical implants.